Government agencies publish warnings and guidance for organizations to defend themselves against advanced persistent threat groups.

Update February 25: The Identifying affected systems section has been updated to announce the availability of scan templates for the vulnerabilities discussed in this blog.

As governments around the world call for heightened cyber vigilance, the reality of our digital world comes into stark relief: there are no boundaries when it comes to the potential damage that can be inflicted as a result of nation-state conflicts. The tactical information shared in this blog is designed to help you prepare your digital response to these rapidly unfolding events.

Jen Easterly, director of the Cyber Security and Infrastructure Security Agency (CISA), recently tweeted that, despite no specific credible threats against organizations in the United States by Russian state-sponsored activity, these advanced persistent threat (APT) groups have historically targeted organizations through a variety of means, including exploiting vulnerabilities in perimeter devices and utilizing Active Directory (AD) for lateral movement. CISA has called for every organization to “adopt a heighted posture of vigilance.”

CISA announced Shields Up, an initiative to empower organizations and provide guidance on how to limit the exposure to common attack paths leveraged by these APT groups.

According to the advisory, the following vulnerabilities have been used in these attacks to gain initial access:

On February 16, CISA published a joint cybersecurity advisory along with the FBI, NSA regarding the “regular targeting” of United States cleared defense contractors (CDCs). According to the advisory, the attacks originate from state-sponsored threat actors in Russia. The targets of the attacks include both large and small CDCs, as well as subcontractors. These CDCs are being targeted because of existing contracts they hold with the United States Department of Defense (DoD) and Intelligence Community.

The targeting activity spans from January 2020 through February 2022. The advisory says that the attackers have “maintained persistent access to multiple CDC networks” with the longest being for “at least six months.” They’ve used this access to exfiltrate both emails and data from these organizations.

Outside of the use of standard techniques (brute force, spear phishing emails), the threat actors have paired harvested credentials with known vulnerabilities to target public-facing applications including VPNs.

The following are a list of CVEs the threat actor has reportedly used:

However, even if CDCs do patch known vulnerabilities within their networks, the threat actors will “alter their tradecraft” in an effort to regain access through “new means.” This is why these government agencies stress that CDCs “maintain constant vigilance for software vulnerabilities and out-of-date security configurations, especially in internet-facing systems.”

In October 2020, CISA published an alert around Russian state-sponsored activity targeting the U.S. Government. In it, several of the vulnerabilities listed above are referenced. However, they also highlight CVE-2020-1472, dubbed “Zerologon,” a critical vulnerability in Microsoft’s Netlogon Protocol that is used as a post-exploitation vulnerability. Zerologon is a popular vulnerability among threat actors and ransomware groups, who often pair it with several of the initial access vulnerabilities in this blog post including several SSL-VPN vulnerabilities.

For attackers, Active Directory is the holy grail for disrupting business operations, exfiltrating sensitive information and deploying malware across a network. Recognizing the importance of Active Directory, it is imperative that organizations are adequately prepared to defend against common techniques leveraged by these APT groups.

Once inside a network, these threat actors will map the environment’s AD in order to connect to domain controllers (DCs). The goal is to exfiltrate credentials from the network and export the ntds.dit AD database file. The threat actors have also been observed using the Mimikatz hacktool in order to “dump admin credentials” from DCs.

Securing users, groups, and computers that require privileges within AD should be a high priority. For example, privileged accounts that have certain attributes configured are susceptible to Kerberoasting, which can lead to impersonation or even Golden Ticket Attack.

Many of the vulnerabilities listed in these alerts are more than a year old and all have patches available. Organizations are strongly urged to find and patch any endpoints that are still vulnerable. In addition to listing vulnerabilities being targeted, the advisories include recommendations for preparing to defend against cyberattacks.

Organizations should also ensure that all passwords within AD are changed often and follow secure complexity and length suggestions to protect against password spray and password brute force attacks.

A list of Tenable plugins to identify these vulnerabilities can be found here. 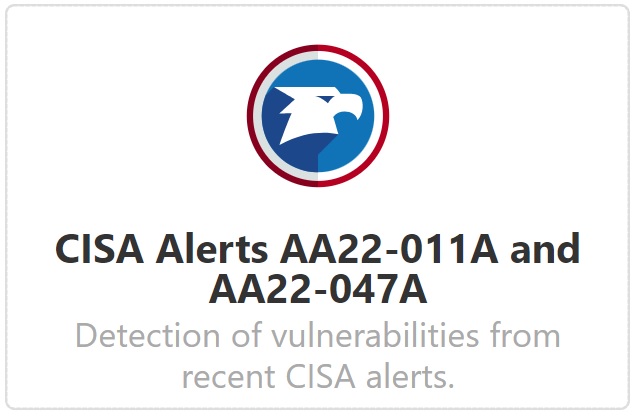 Although nations and organizations are being targeted, history has taught us that the digital impact is likely to be far-reaching. But this speculation shouldn’t detract from the obvious: there are steps you can take to protect yourself. Tenable is committed to doing our utmost to help organizations guard themselves in a world where we must acknowledge that digital threats will be a significant part of any conflict scenario.